Thoughts of a wife, mother and historian (not necessarily in that order).

It is the last day the university is open before Christmas.  The heating is off in my office, as is the light in the hallway.  In fact, I think I am the only person left working on this floor.  So what better time to take a moment to look back and take stock of this incredibly hectic year. 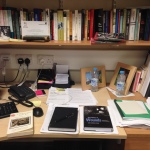 I had hoped to be doing this from the perspective of a clear desk, with all major projects completed, at least until the new year. Sadly, this is not to be.  I am preparing to place the fifth draft of an article which still needs a conclusion, a few more supporting quotations and a couple of hours of formatting footnotes before I can send it to the editor in my bag to take home with me.  Alongside that are a 350-page book and 48-page grant application, both of which I need to (re)familiarize myself with in preparation for two interviews early in the new year.  Oh, and then there is the grant application I need to redraft with the goal of resubmitting in early February. This will be the sixth time I have submitted this project for consideration by a funding body or grant-awarding committee.

So there is quite a lot of work still to do over the next two weeks, between the turkey and the Christmas cake and the two excited small children for whom Christmas is nothing but magic, a fact that makes it hard, sometimes, to remember just how much I have achieved over the past year.  But for all the lack of a nice tidy ending, there are definite signs of progress, not least the lovely folder that tops my document list bearing the working title of the book I will be writing next year.  The joy of the folder lies not just in its existence, but also in the fact that it contains two documents, a draft proposal and a draft introduction.  Baby steps perhaps, but concrete evidence nonetheless that this book is actually happening.  In the past 12 months it has gone from a vague promise to myself and my funding body to a clear outline and argument with a story to tell and a point to make.

And there are other concrete achievements.  The article I have been working on for the last few weeks may be tantalizingly unfinished, but the one I was working on this time last year is not only completed but has also been accepted for publication next year, marking the culmination of a project that had its inception nearly three years ago.  Slightly more abstractly, the piles of marking and course documentation, waiting to be filed following the completion of exams and second marking next month, bear witness to the time I have committed to teaching this year, time which has not only boosted both my CV and my confidence in possibly my least favourite aspect of the academic discipline, but also laid the groundwork for my forthcoming application to the Higher Education Academy for professional validation.

And then there are the abstract developments, such as the discovery that, despite two television appearances and a number of radio interviews, I am probably not cut out to be a full scale media don or public intellectual.  As much as I have enjoyed my engagement with broadcast media, particularly my interactions with the BBC as a New Generation Thinkers finalist and a World War One at Home adviser, I suspect I will always prefer blogging, whether on here or for collaborative blogs, as a form of public engagement.  Which brings me to my greatest regret of the year, the fact I have not been able to commit more time to this blog.  Too many subjects have slipped away from me as I have struggled to manage my priorities and keep some semblance of a work-life balance; too many comments have been made too late and in too much of a hurry.  I make no rash promises for doing better next year, but absence has made the heart grow fonder in this case, making me realize how important the process of blogging has become to working through my ideas.  With a little luck and slightly better management, I hope to be able to properly blog the progress of my book next year, as it goes from draft outline to completed manuscript.

Next year will, of course, be different.  As a colleague and fellow First World War historian has pointed out to me, 2014 has been a particularly hectic one for those of us who study the subject.  There have been more opportunities for undertaking innovative research and engaging with interested audiences than any of us could possibly take complete advantage of. Highlights for me have included the wealth of interesting academic conferences to choose from, including the wonderful War: An Emotional History which continues to inspire me and shape my approach to my work; the opportunity to help put together and teach a Massive Open Online Course, not something I could ever have anticipated or which I altogether enjoyed but which taught me a great deal; and the opportunity to engage with a range of interesting and inspiring artistic projects that have, once again, raised questions of the roles of historic and artistic interpretation in the process of commemoration. Low points include some frustratingly bad television, pointless and clichéd debates which failed to make full use of the real depth of historical knowledge about the war, both nationally and transnationally, that exists in Britain today, and the mind-numbing boredom that overwhelms me every time I contemplate the pointless unending discussions of the Christmas Truce which appear to have overwhelmed all else in the past weeks.  I think the high points more than balance out the low; at the very least they give me hope that there will be interesting discussions to be had in the future as we continue the centenary commemorations.

So there we have it, quite a lot of good, a bit of bad, a smattering of seriously ugly.  A year in which, however slowly, progress has been made and one in which much more has been promised but not yet achieved.  I enter the final week of the old year with a sense of incompletion but also of hope, a hope which I will desperately cling to as I face 2015 from a point of deep uncertainty and insecurity.  At present my current contract is due to come to an end in May.  I do have a very real chance of securing more funding after that (the interviews and grant applications I mentioned), although after over a year of pursuing them I am reaching exhaustion point.  I have spent so much of this year saying that I should know, one way or the other what would be happening to me by the end of the year.  It is not to be.  It will not, in my case, all be over by Christmas.  But for all that, there is hope of a positive resolution, something that would mean both immense personal achievement for me and security for my family.  So I will leave you with that sense of hope, to temper the anticipation of the hard work that will be needed if I am to have any chance of accomplishing the desired outcome.

Merry Christmas. And a hopeful, healthy, happy New Year to you all.