Thoughts of a wife, mother and historian (not necessarily in that order).

My children finished school for the academic year today. Universities have been celebrating graduations. Emails about induction week are starting to circulate. It must be the start of the summer holidays.

This summer, in between childcare duties, I have several projects to work on – a couple of applications, two articles to (re)write, a very overdue book review, some engagement events to prep for. But my main goal, as I keep telling people, is working out what my next book is going to be about. And the problem I have (which is a nice one to have, but no less problematic for that) is an embarrassment of riches. I have three possibilities but probably only the mental space and energy to concentrate on one of them. They are as follows:

1) The book I need to write. This is the book I have promised the funders that I would produce from the Men, Women and Care project. It is a book about disability, masculinity, temporality and the life cycle; about care giving, emotions and gender; about the history of the welfare state, the family and the role of the individual in negotiating the spaces where the two overlap. It will be a very academic book, a book which will use words like ‘temporality’, ‘hegemony’ and even, if today’s reading is anything to go by, even ‘phenomenology’. It is a book that may, eventually becoming the articulation of the most significant intervention I will ever make into the historiography of masculinities and the First World War. At the moment, it is unfocused and under-researched.

2) The book I have promised myself I will write. In January, I tweeted that my resolution for the year was to write the ‘trade’ version of my recent academic book on the history of the RAMC in the First World War. This one, I have done the research on. I also have a chapter and a half in draft, about five different plans of chapter breakdowns and a great deal of excellent advice from colleagues about how to approach this project. What I don’t have, yet, is either a clear, saleable thesis, or a proper strategy for finding myself an agent, which is very much the next thing I need to do to get this off the ground.

3) The book I want to write. For years now I have been talking about doing a project on the representation of trauma in detective fiction – and I still want to do it, not least so I can write properly Ellis Peters’ George Felse novels. But, after talking about the project for so long without actually doing anything about it, I am starting to think there may be a less academic, more experimental book that I need to write first, about Golden Age detective fiction and contemporary novels set in the Golden Age, how both use images of and references to the First World War and what the differences between these two forms of the genre can tell us about gender, memory and commemoration. I’m pretty sure I have the argument for this one, and I find myself writing bits and pieces at odd intervals, but I also need to dedicate a lot more time to (re)reading the works of Jacqueline Winspear, Frances Brody, Kerry Greenwood, as well as some of the more obscure members of the Detection Club if this is going to be the book I really want it to be.

So those are my options, three projects, all of which require time commitment in different ways. Alongside the continuing work needed for the final year of Men, Women and Care, the teaching and administration I’ve agreed to undertake and my family commitments, there is barely room for one of them, let alone all three! So I am looking for advice: which one of these do I prioritise this summer?

(And the ‘and counting’? That would be the book I dream of writing – the detective novel in the style of Dorothy L. Sayers, with a plot based around an ex-servicemen’s association and post-war battlefield pilgrimages. Some day…)

So as is traditional (at least for the past two years), it is time for me to reflect on the past year and offer a few hopes for the coming one.  Last year I reflected on a hard year in 2015 and hoped for an easier one in 2016.  I doubt many people would identify this past year as such, and the political and international situation looks bleaker than it did 12 months ago.  But at a personal level, this has been a year that, even if not noticeably easy, then at least an improvement on the previous one.  Both my parents are still ill and neither will ever rid themselves of their respective conditions, but somehow we have come to some sort of accommodation that makes the day-to-day manageable, most days.  This is life, not crisis. Similarly, the managerial work that felt so frightening two years ago has become less overwhelming as I have become more familiar with it.  It is still labour that I am less secure with than, say, writing a book, but I am slowly discovering my own capability for this role, which makes things easier.

And there have been some triumphs. My husband got himself a new job, which he will take up in a couple of months.  This brings many positives and a few potential problems, but it is definitely a step in the direction that he wants to go.  My daughter started on the great intellectual adventure that is formal schooling. In the column marked ‘unadulterated joy’, my sister got married and my brother introduced us to his new partner. The Men, Women and Care project is properly off the ground (including its very own website and blog!) and definitely going places, places which offer their own challenges but are hugely exciting.  The team I have recruited is, so far, living up to their promise and doing interesting and creative work.  There have been a few (small) funding successes, to balance out the inevitable failures.  And, above all, I finally got my book proposal off to a publisher and it has been accepted!

Which is why this year, more than most, feels unfinished.  So much of the positive has not be the culmination or completion of hard work, whether personal or professional, but baby steps along the journey.  So I will enter the new year with papers to write, books to read, a major project to work on, including pursuing new theoretical and methodological angles which I hadn’t considered before this year, a few smaller projects (including two conferences) to organise, and, of course, a book to complete.  On the domestic front, there are still carpets to be laid, decisions to be made about renovations, and the tantalising potential of a house move that has been under discussion for the past year. The children continue to grow, physically, emotionally and mentally, challenging me as a parent as they do so.

There is a lot to do, but I will go into the new year with some lessons learned – about my own ability to recover from the personal paralysis induced by major political crises, about the importance of flexibility and my own capacity to accommodate the unexpected, about how much I can do, how much I rely on others to lend a hand or ear – and just how many wonderful friends and colleagues I have who do just that.  Some things, I hope, will come to fruition in 2017.  Others will carry on carrying on.  Whatever the new year brings, however, I am approaching it, once again, in hope and more energy than last year.

Finally, it has been a year when I have turned more than usual to poetry as a source of consolation, primarily Auden and Frost, who I can probably say with some confidence are my favourite poets.  So I will leave you with a poem appropriate for this point in the year, as the temperatures tumble and cover the world in frost crystals, if not necessarily snow, making my first run after a 5-month hiatus due to planter faciitis, a thing of sparkling wonder and promise.  It is, as it happens, the first poem I was ever conscious of memorising as a child.

Stopping by Woods on a Snowy Evening

Whose woods these are I think I know.
His house is in the village though;
He will not see me stopping here
To watch his woods fill up with snow.

My little horse must think it queer
To stop without a farmhouse near
Between the woods and snowy lake
The darkest evening of the year.

He gives his harness bells a shake
To ask if there is some mistake.
The only other sound’s the sweep
Of easy wind and downy flake.

Wish you and yours a year of promises kept and fulfilled and miles travelled safely, however near or far the ultimate destination. Happy New Year.

A couple of publicity (self and otherwise) notices.

The University of Leeds Legacies of War seminar series is delighted to announce that Professor Adrian Gregory will be giving the first paper of the new term on Thursday, 7th February at 5:00 in Michael Sadler Room 3.11.  He will be speaking on the topic of ‘Did God Survive the Somme?’  All are welcome. 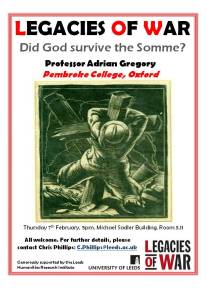 My review of Leo van Bergen’s Before My Helpless Sight: Suffering, Dying and Military Medicine on the Western Front, 1914-1918 appears in the latest edition of First World War Studies which also includes several interesting-looking articles.  I should be reading about the establishment of the Territorial Army in Britain, but I think I may take break and read about Old Etonians, demographics and eugenics instead, courtesy of Richard Carr and Bradley W. Hart.